Our major spiritual test as humans is to resist becoming attached, especially to images which we habitually create in our minds.

We cling white-knuckled to apparitions and delusions, scared of losing our synthetic self-made view of reality.

This fear and acquisitiveness has driven us to etch a thick line between the visible and the invisible so that we cannot live fully, cannot enter the game as qualified players.

Instead, we stand on the sidelines and live indirectly according to our own rules.

Images are wonderful if we resist trying to make them permanent, trying to archive and fix them in stone.

Instead, we can simply surrender ourselves to beautiful, bewitching or bedeviling images and their resonance will explode in the vast torrential flow of all existence.

Then we will flow with them in a glorious cascade into true happiness and freedom, into our natural essence of love and compassion.

She is angry that word-fellas get inside her people with their Easy-Happy-Sexy so that they no longer want to be in the Lands. This happened to her son ginger who became alcoholic and addicted to heroine using word-fella’s handouts. He died in a telephone box in Lumaluma’s city.

“lumaluma! He seep into that boy with flashing pictures and women wriggling in tight-skin clothes, with bright colour lights like glow-worms and beetles, and music made inside word-fella’s machines.

Bijada (ginger-son) left his Lands. Mother warned him that word-fella had no Dreaming ancestors of Lands and that instead had ‘Easy’ and ‘Happy’ and ‘Sexy.’ Once his spirit was deep inside that big bottle it would become a tiny insect slowly creeping down into a golden sea where it sipped and sucked, on and on. It would soon become his very own secret golden sea, but bijada—his Emu soul, would be nowhere in sight. Then soon he would not want anything except nectar–Easy-Happy-Sexy nectar.

She warned him he would become bottle slave, and finally word-fella would kick his slow slave body out of town, and call him ‘smelly,’ call him ‘dirty,’ call him ‘savage!’ But there were no ears or eyes in ginger, bijada boy. He had already left the Lands. 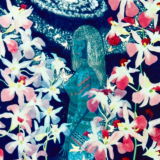 2 replies on “…always from the sidelines”

It’s such a pleasure to be back in contact with you and to have you supporting me so closely, dearest Gilles. 🥰 This time is precious before I launch my site to a much wider audience at the beginning of April. Blessings in their millions to you. x🌟